Casa > Notizie del settore > The biggest technological innovation in ten years! Arm releases Armv9 architecture! Not subject to the US EAR, Huawei can be authorized!

The biggest technological innovation in ten years! Arm releases Armv9 architecture! Not subject to the US EAR, Huawei can be authorized!

On March 30, local time, Arm announced the official launch of the Armv9 architecture to respond to the global demand for ubiquitous professional processing, which has increasingly powerful security and artificial intelligence (AI) capabilities. Armv9 is the biggest technological innovation of ARM in ten years. The previous generation V8 architecture was released in October 2011.

Arm’s CEO Simon Segars said, “As we look to the future defined by AI, we must lay a solid foundation for advanced computing to meet the unique challenges of the future. Armv9 is our answer. The economics and design of general computing On the basis of freedom and accessibility, the market needs universal dedicated, safe and powerful processing capabilities, which will drive the development of the next 300 billion chips based on the Arm architecture, and Armv9 is the technological pioneer of these chips." Shipments of chips based on the Arm architecture continue to accelerate, and the shipments of devices based on the Arm architecture have exceeded 100 billion in the past five years. At the current speed, whether it is on the terminal, data network or cloud, 100% of the world's shared data will soon be processed through Arm technology. Such a wide range of applications allows Arm to shoulder more responsibilities and missions. For this reason, Arm provides more security and performance in Armv9, conforms to the strong development of AI, Internet of Things and 5G on a global scale, and accelerates each industrial application. From general calculations to special calculations.

At the ArmVisionDay event held today, Arm CEO Simon Segars, Arm Senior Vice President, Chief Architect and Technical Fellow Richard Grisenthwaite, and Arm Marketing Vice President Ian Smythe shared the characteristics of the Armv9 architecture to media including e-enthusiasts.com. As well as insights into the future development trend of semiconductors, and responded to the authorization and compliance of the V9 architecture.

When talking about the difference between Armv9 and the previous generation Armv8 architecture, Arm executives pointed out that the V9 architecture has significant improvements in SVE2, confidential computing architecture, and dedicated computing. 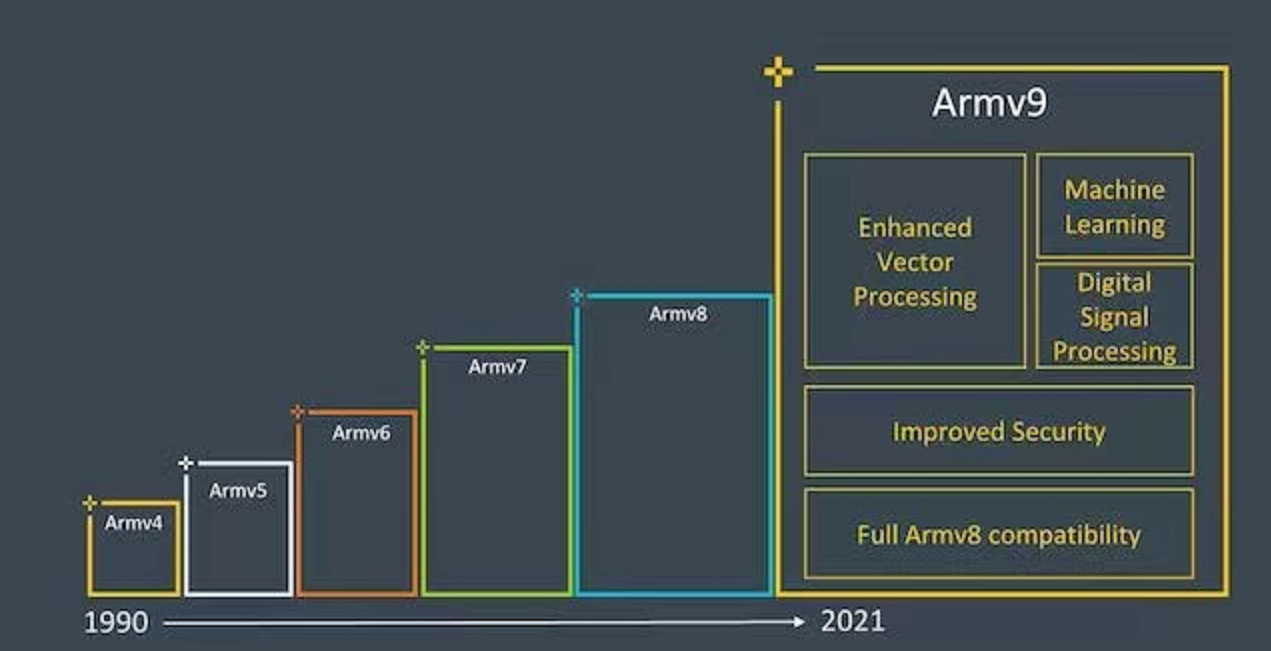 Arm cooperated with Fujitsu to develop the Scalable Vector Extension (SVE) technology and drive the world's fastest supercomputer "Fuyue". On this basis, Arm developed SVE2 for Armv9 in order to achieve enhanced machine learning and digital signal processing capabilities in a wider range of applications.

Arm executives said that SVE2 can provide more vectorization and parallel processing of machine learning and DSP. SVE2 solves the problem of more HPC workloads and lack of more versatile instructions by supplementing the instructions required by the new scalable SIMD instruction set, so that it can be used for more DSP workloads.

SVE2 enhances the processing capabilities of 5G systems, virtual and augmented reality, and ML workloads running locally on the CPU, such as image processing and smart home applications. In the next few years, Arm will further expand the AI capabilities of its technology. In addition to continuous AI innovation in its MaliGPU and EthosNPU, it will also greatly enhance the matrix multiplication in the CPU.

It can be seen that SVE2 technology plays a vital role in strengthening the characteristics of the Armv9 architecture for artificial intelligence.

Based on the Armv8 architecture, Arm has begun to introduce TrustZone security hardware based on CortexA, M, and R series and promote the PSA security standard. The PSA standard is being expanded from M to A, and then to the R series.

Armv9 has stronger security performance than V8 architecture, covering security from the cloud to the end. The Arm Confidential Computing Architecture (CCA) was introduced in the Armv9 architecture roadmap.

Confidential computing performs calculations by creating a secure hardware-based operating environment, protecting part of the code and data from being accessed or modified, or even affected by privileged software. 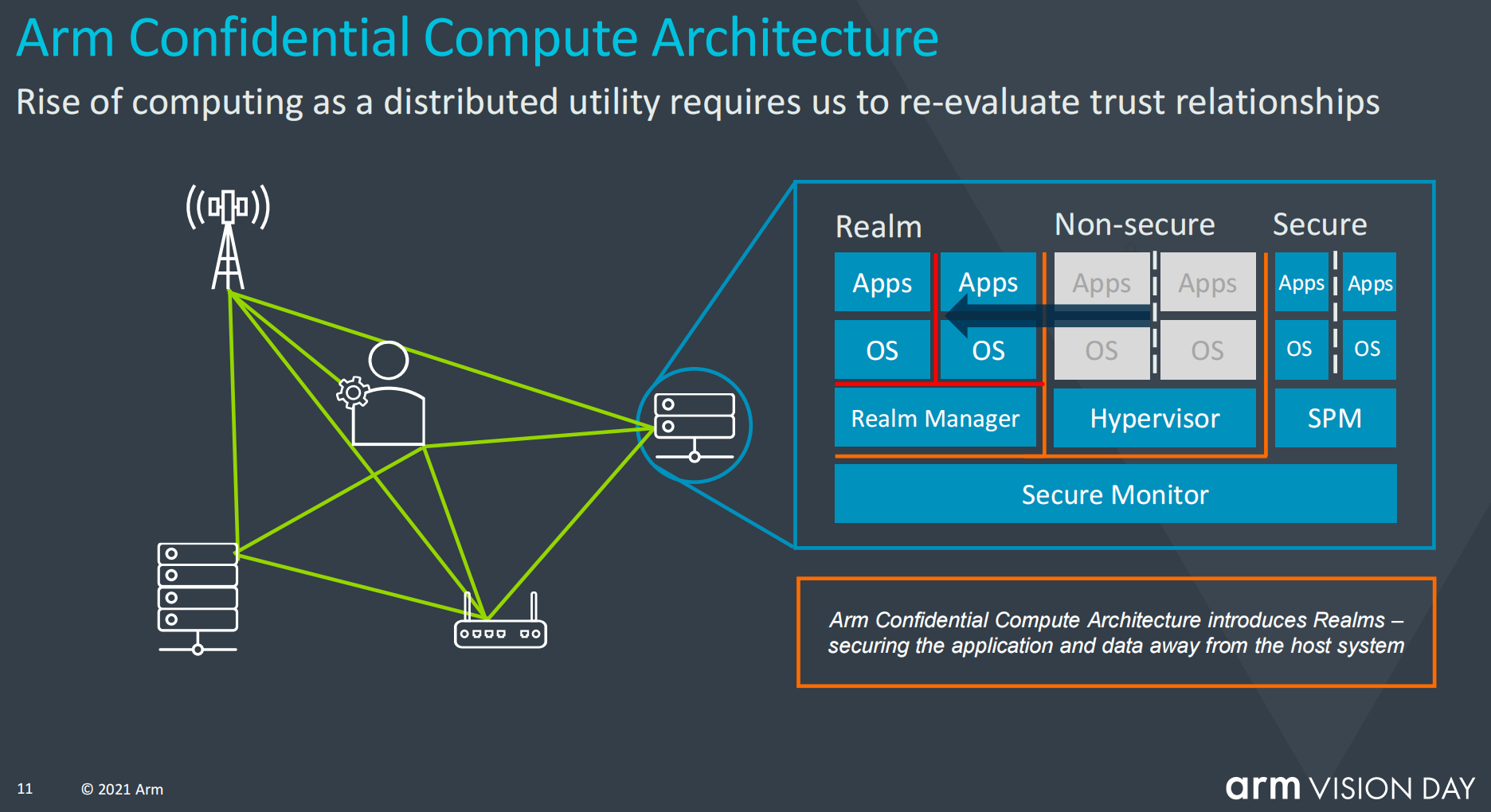 ArmCCA will introduce the concept of dynamically creating realms, which are for all applications and run in an environment independent of secure or non-secure environments to achieve the purpose of protecting data security. For example, in commercial applications, the confidential domain can protect commercial confidential data and codes in the system, regardless of whether they are being used, idle, or in transit. In fact, in a recent Pulse survey of corporate executives, more than 90% of respondents believe that confidential computing can help reduce the cost of companies’ security investments, so that they can invest heavily in engineering Innovation.

From general computing to dedicated computing

Arm provides CPU, GPU, NPU and other processor IPs for the computing field, especially focusing on the improvement of CPU performance. However, Arm also sees that in response to the development trend of general computing to dedicated computing for different industry applications, Arm executives emphasized that for different needs, the architecture essentially needs to be more flexible. For example, in the field of smart home, it may be a combination of CPU and NPU. AR/VR display requires a combination of GPU, NPU, and CPU. On the smartphone side, more attention is paid to the combination of CPU, GPU, and NPU. 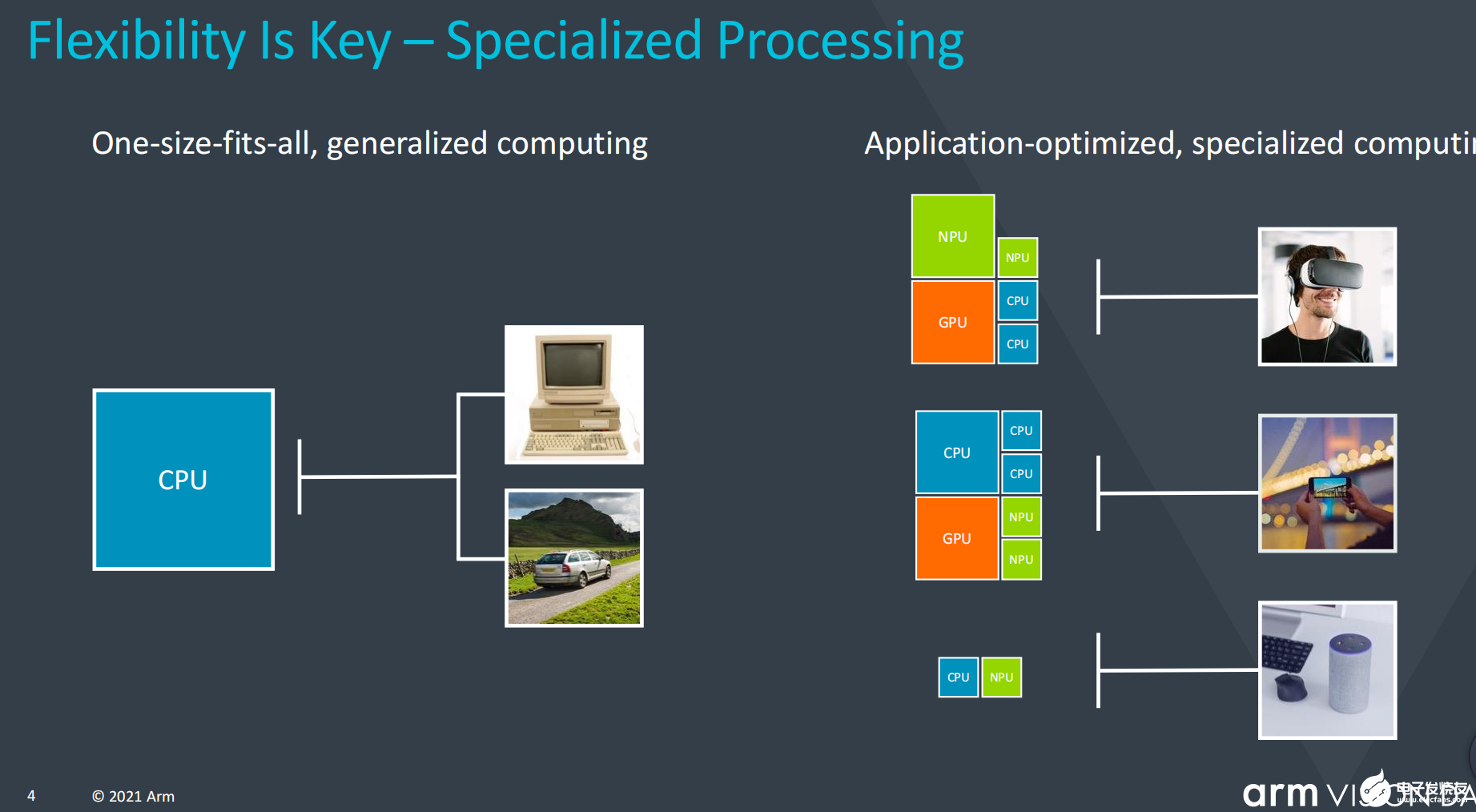 Arm executives said that as CPUs are becoming more and more powerful, NPUs will also become more mature. For terminal products, it will have better cost and performance. For example, in the future, functions such as voice recognition can be easily implemented on MCUs of less than one dollar.

By applying the design principles of comprehensive computing to the entire IP portfolio including automotive, client, infrastructure and IoT solutions, Armv9 system-level technology will pervade the entire IP solution and improve individual IP. In addition, Arm is also developing a number of technologies to increase frequency, bandwidth, cache, and reduce memory latency, thereby maximizing the performance of Armv9-based CPUs.

According to reports, Armv9 will be applicable to the full range of Arm products, but will be the first to be used in the ArmCortexA series, and will gradually be used in the M and R series later. The first chip terminal using Armv9 architecture will be released by the end of this year. Arm executives said that, especially in the server and automotive fields, we see that many manufacturers are interested in adopting Armv9 architecture. In other words, the Armv9 architecture will first vigorously promote the development of smart phones, servers, unmanned driving, and automobile intelligence, and gradually expand to the Internet of Things and other fields.

Finally, when it comes to the issue of Armv9’s authorization and compliance, Arm executives said that Arm has both IP originating in the United States and IP originating not in the United States. After a comprehensive review, Arm determined that its Armv9 architecture is not subject to the US Export Administration Regulations (EAR). Arm has notified relevant US government departments of this, and we will continue to abide by the US Department of Commerce's guidelines for Huawei and its subsidiary HiSilicon.