Casa > Notizie del settore > Affected by the Covid-19, it is estimated that the overall IC market sales in Q2 will decrease by 5%

Affected by the Covid-19, it is estimated that the overall IC market sales in Q2 will decrease by 5%

Market research firm IC Insights yesterday (4) published a list of sales guidance for 21 semiconductor companies in the second quarter of 2020.The list includes companies from all regions and countries of the world, including all types of semiconductors.

Due to the uncertain impact of COVID-19 on business in the second half of this year, many semiconductor companies have not provided full-year guidance for 2020.Still, as the chart below shows, dozens of companies are forecasting second-quarter results.Most of the companies that have issued quarterly guidance have mentioned the many uncertainties caused by the outbreak, so they have taken more factors into account in their forecasts than in the past. 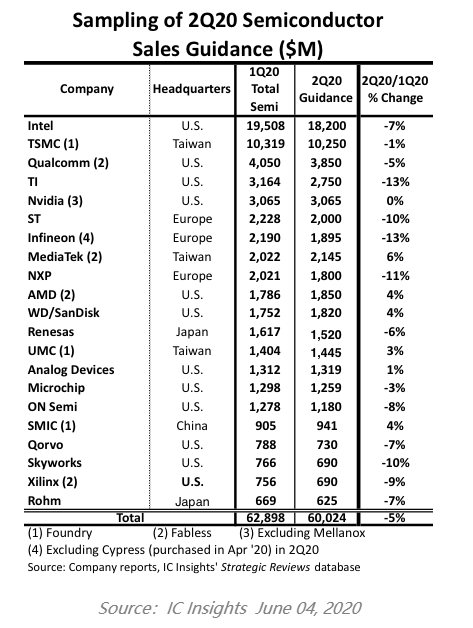 Six companies expect sales growth in the second quarter, including Mediatek, AMD, Western Digital/Sandisk, UmC, ADI and SMIC, with the remaining 15 expecting declines, according to the list.

Notably, Mediatek, which is bullish on demand for 5G chips for smartphones, had the highest growth of 6 per cent in its guidance forecast for the second quarter.Strong demand for NAND flash in data centers and SSD applications is reflected in the 4% growth guidance given by Western Digital/Sandisk, whose flash sales account for the bulk of both end markets

By contrast, the big three European semiconductor suppliers, as well as TI and Skyworks, all expect double-digit sales declines.