Casa > Notizie del settore > "WT Microelectronics cooperated with ADI" the news is not true, but there is another insider story ！

"WT Microelectronics cooperated with ADI" the news is not true, but there is another insider story ！

Lost at sunrise but gained at sunset.Today, it was reported that WT Microelectronics had signed the agency rights of Analog Devices (ADI), the second largest analog chip manufacturer in the world.

According to reliable sources, Morrihan, a subsidiary of WT Microelectronics , has obtained ADI's agency qualification in mainland China. Previously, like Excelpoint International and Hong Kong Macnica Morrihan was also a regional agent and had been responsible for ADI's Taiwanese distribution business, but never involved the Chinese mainland market. With the signing of this agreement, Morrihan has now successfully expanded ADI's business scope to the Chinese mainland market. Therefore, it is not true that the news that WT Microelectronics signed ADI to fight against the WPG Holdings, and that ADI and WT Microelectronics intend to fight against TI

In April 2009,WT Microelectronics  announced the acquisition of Morrihan. Morrihan is mainly engaged in industrial control, optical communication, MCU and other products with deep technical components, with a gross margin of up to 12%.On the other hand, Morrihan's sales market used to be limited to the Taiwan region of China. After the merger, its agent products can be quickly pushed through WT's operating platform in mainland China, South Korea and South Asia. 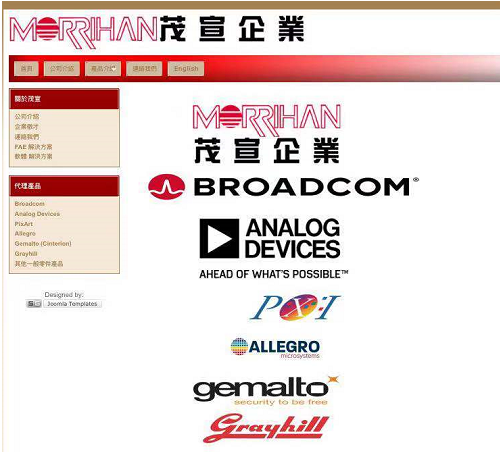 Some industry speculations that the acquisition of ADI's agency rights through its subsidiaries is related to the "embarrassing" situation that WT Microelectronics is currently facing: The General Assembly has publicly acquired WT's equity, and at the same time, it has previously announced the cancellation of WT Microelectronics and WPG Holdings Trade Organization's (WPI) agency, TI, also happens to be ADI's biggest competitor in the field of analog chips.

As for the above speculation, an ADI insider said, ADI and Morrihan's proxy relationship has existed for a long time, and the WPG holdings public acquisition of WT Microelectronics's stake happened recently, there is a long time gap between this.Therefore, the two events occurred at a point in time unrelated

According to the 2018 top 10 analog IC vendors' revenue and ranking data released by IC Insights before, ADI ranked second with a revenue of 5.505 billion US dollars, with a market share of 9%. However, there is still a big gap with the top Texas Instruments (TI). TI's 2018 revenue was as high as $ 10.8 billion, almost double that of ADI, and its market share reached 18%.

WT Microelectronics, through his subsidiary Morrihan, expanded ADI's regional business scope to the Chinese mainland market, which was exactly the right time

It is worth mentioning that ADI cut down the gentle Avnet in 2017, and only left ARROW's one of the world's authorized agent, Excelpoint,Macnica, Morrihan was only regional agents, help ADI direct plunder TI business chance, but if the ADI authorized let Morrihan will business category to expand to the mainland, is the opportunity to undertake WT Microelectronics original TI customer resources, it will be a good deal.